I vaguely remember now seeing this before, but could not recall it when someone asked about it the other day, that Inventor can generate flat pattern for any folded sheet metal model, without having to first create all the related sheet metal features (bend, flange, etc) by hand. 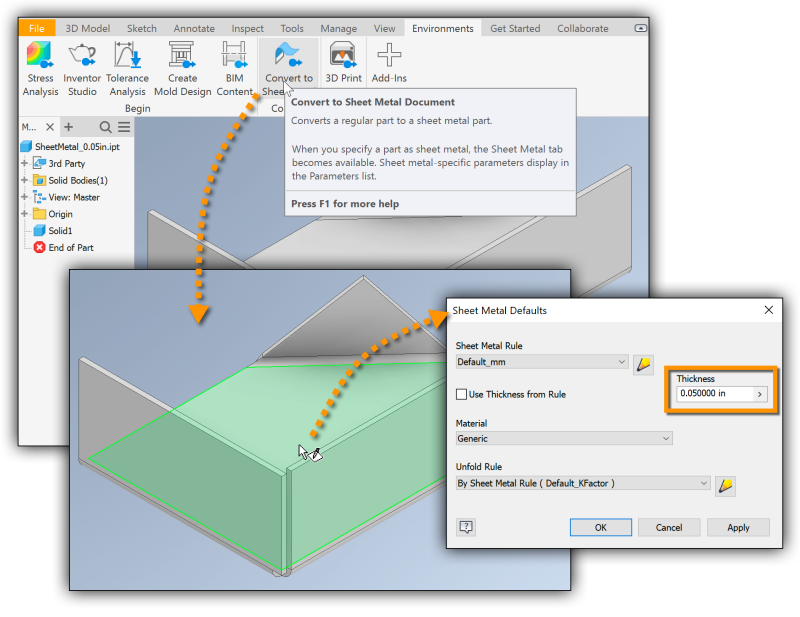 In this case I started with opening a STEP file of the 3D folded sheet metal. When I select "Convert To Sheet Metal" then I need to select the base face for the sheet metal, and then the thickness will be automatically populated with the correct value.

There is no dedicated function in the Inventor API for that very last part about finding out the thickness.
However, we can use things like FindUsingRay() to find the face opposite the one we want to use as the base, and then check the distance between them

There are two ways to open a non-Inventor file: simply use the Documents.Open() function, in which case the file will be converted, or through ComponentDefinition.ImportedComponents, in which case you can also decide to reference the file - see Import AnyCAD documents associatively

When doing this whole thing through the API, then you have to find a way to figure out which face should be used as base. One option could be looking for the largest planar face.
Once you have that you need to find the face opposite that and check the distance between them. That should provide the thickness of the sheet metal.

Here is a VBA sample showing this: 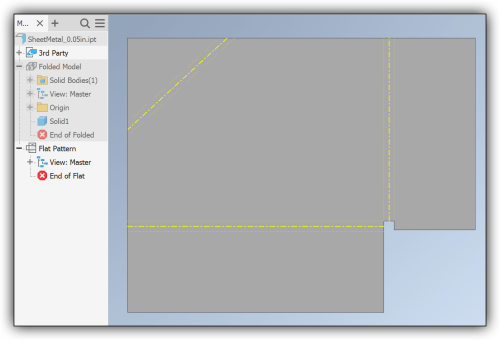 If the part is not really a folded sheet metal, then though the Unfold "succeeds", the body of the "Folded Model" and the "Flat Pattern" will be the same.
You can test this by comparing the bodies:

Kirk Arthur reminded me at Autodesk University about an issue with add-ins that I had blogged about and asked if I had made the recommended change to the Sheet Metal Extents add-in.  I truthfully couldn’t remember so I’ve gone ahead and bumped the version number, recompiled it, built the installer, and made the new version available.  As usual, please let me know if you run into any problems with it.  This is version 3.8 and should be compatible with Inventor 2013 and later.  Use this link to download a zip file that contains an installer that will install the add-in.

If you’re unfamiliar with this add-in, here’s the text from the ReadMe with a brief description.

This is an Add-In that when installed will automatically create and update three custom iProperties.  It should work for Inventor 2013 and later.  The iProperties created are:

Several years ago I wrote an add-in that creates custom iProperties and parameters that contain the length and width of the flat pattern.  (Actually it creates the parameters and sets the “Export Parameter” setting so Inventor will automatically created the iProperties.)  It also creates an iProperty with the name of the sheet metal style.  There had been a couple of problems reported and everything that I’m aware of has now been fixed.

I know there are several people making use of this add-in but since I originally wrote it Inventor has added additional new native capabilities that should eliminate the need for my add-in in many cases.  One of these capabilities, that’s not widely known, is the ability to define expressions for parameter values.  This is demonstrated in the picture below where the value of the iProperty named “SheetMetalWidth“ has the value “=<Sheet Metal Width>”.  The name can be anything but the value is important. The “=” sign signifies that the iProperty value is an expression and the “<>” sign wraps around a known name.  In this example I’m using “Sheet Metal Width” and “Sheet Metal Length” as the known names. 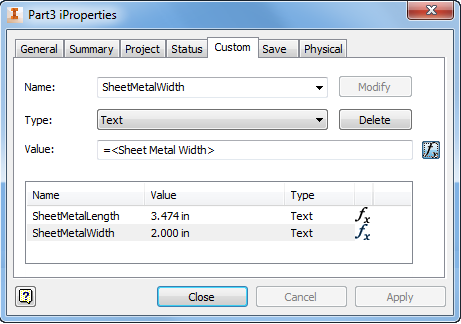 You can also create a single parameter that combines several values in the expression such as “=<Sheet Metal Length> x <Sheet Metal Width>”, which results in the value of the iProperty named “Full Size” as shown below.  You can also use the names of iProperties in expressions to create the other example shown below where I’ve used the iProperties “Title” and “Author” to create the iProperty named “New Title”.  The value of the Title property in that document is “Extent Sample” and Author is my name.  When you edit iProperties that use a function, by default the result is shown in the Value field but clicking the “fx” button to the right of the field will display the original expression and allow you to edit it. 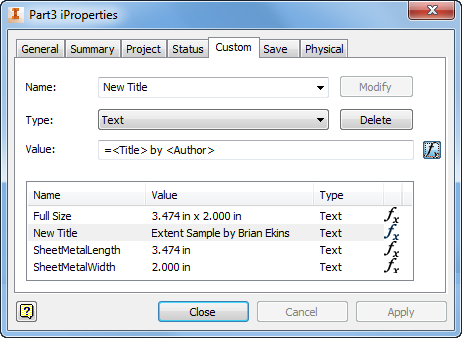 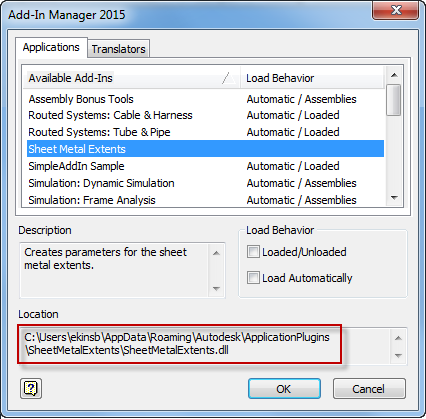 After you’ve installed the new add-in you can verify you have the latest version by looking in the Add-In Manager again and checking that the add-in has the name “Sheet Metal Extents 3.5” as shown below.

If you find any problems or have suggestions for improvement, please let me know at brian.ekins@autodesk.com

Enhancements in the API for Parts

Previous to Inventor 2015 you could create a mid plane between two parallel planes. Inventor now supports the creation of a plane between any two planes and they do not have to be parallel. An example of this is bisecting two perpendicular planes. A new point argument that defines which quadrant to use needs to be provided because if the planes are not parallel there are two possible solutions. 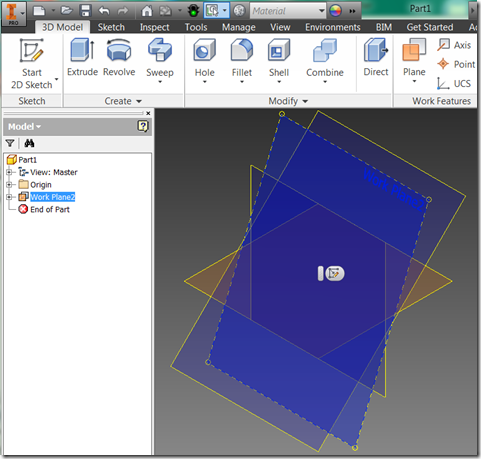 In the UI the direct edit feature lets you push and pull features. The API has read support and allows you to find information such as  which operations were defined.

Another enhancement in the user interface is T-Spline capabilities. In the product it is referred to as a Freeform. The 2015 API has minimal support for this but should change in the future. In this release you can find the FreeformFeature and do basic feature operations such as getting its name, suppressing it or reordering it in the tree.

Inventor 2015 has changes to sketching that makes it more intuitive to use. The API has been updated because there are quite a few new settings.

These settings are exposed through the API.

Enhancements in the API for Sheet metal

Now when you do a punch you have an option to have the punch cut across a bend. 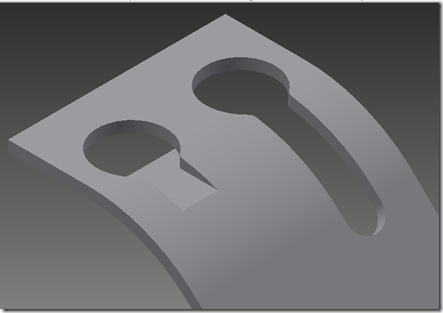 Punch on the right used cut across bend 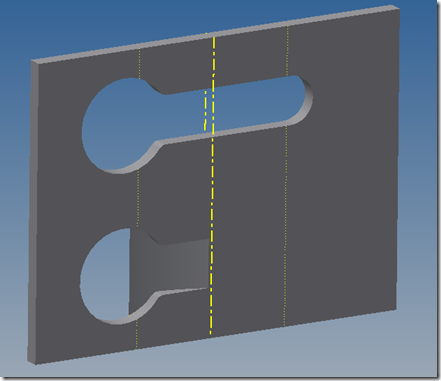 You can think of it as unfolding the part and doing the punch and then folding it back. (the edges are normal to the flat) 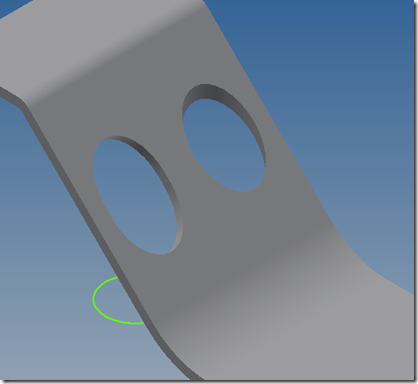 Cut on the left is normal to the flat 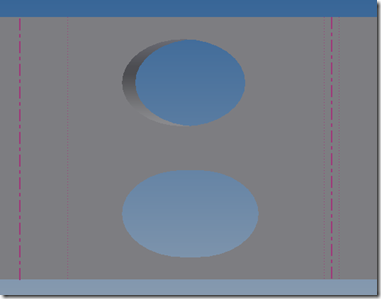 How it looks in the flat pattern.

You now have more control over the flat pattern orientation.  In the UI there is a new dialog where you can pre define multiple orientations and switch between those and the API provides full access. 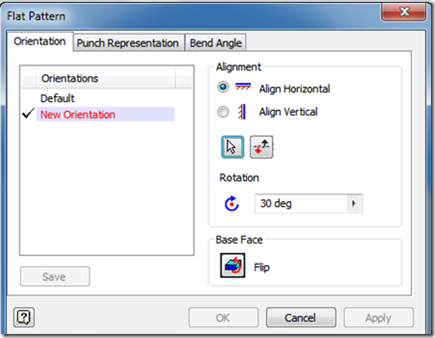 Enhancements in API for Assemblies

The assembly symmetry constraint has a new option to control the orientation and the API was enhanced to provide that capability.

Enhancements in API for Drawings

In this release you have control over hole table title. 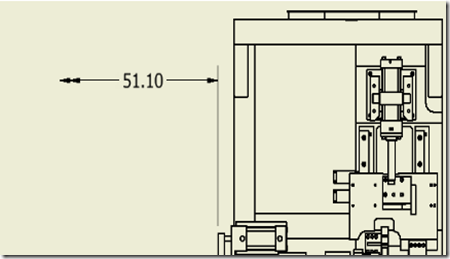 The FileManager object now has a method ReferencedDocumentCount that will allow you to get the number of referenced documents. The WillOpenExpressDefault method will allow you to find out whether the input assembly will open in Express mode by default. To use these methods you just pass in a file name and it returns the information. 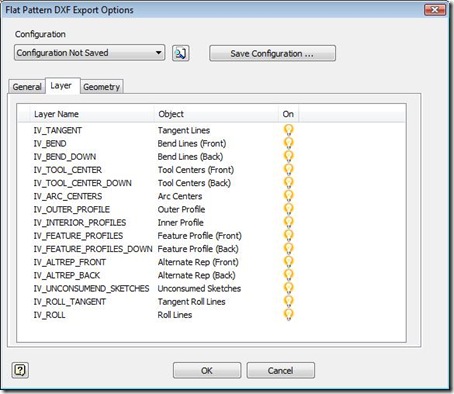 The dialog allows you to specify the layer name for various categories of items that can exist in a flat pattern.  You can change the layer names and control which groups are written to the DXF or DWG file.  This is all good functionality but you’re limited to the predefined sets of groups.  There is a solution to this that allows you to have very detailed control over which layer specific entities are written to.

Using the API you can assign an attribute to an edge in the flat pattern and this will control which layer that edge will be written to in the DXF or DWG file.  The name of the layer is specified by the attribute.  Below is a very simple example that will add an attribute to a selected edge.

' This program assumes that a sheet metal document is open, the
' flat pattern is active, and that an edge of the flat pattern is
' selected.  For simplicity, no error checking is done to
' validate this.
Sub AddLayerName()
' Get the active document.
Dim oDoc As PartDocument
Set oDoc = ThisApplication.ActiveDocument

Any edge on the flat pattern model is valid to name.  The bend and tangent lines are also Edge objects and can be assigned a layer name too.  Defining layers for sketches and sketch entities is not currently supported so attributes added to these will be ignored.  When you specify the layer of an entity using this technique it overrides the dialog settings.  For example, if an edge will normally be written to the IV_OUTER_PROFILE it will instead be written to the layer you specify using the attribute.

One other thing to be aware of is that only the edges that are visible are written to the DXF or DWG file.  The picture below shows a flat pattern as viewed with the Z axis pointed towards you.  This is the geometry you would expect in the output DXF or DWG file. 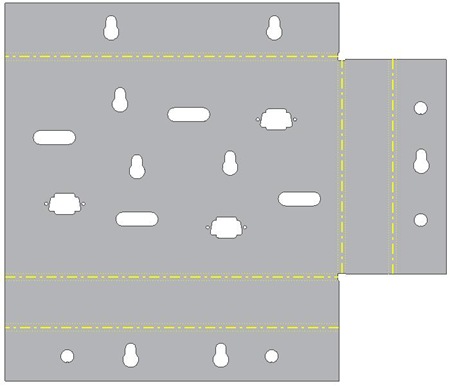 Here’s a close-up of an area of the model where it’s slightly rotated.  The red selected edge is on the “back” of the part and will not be written out to the DXF or DWG file.  Adding an attribute to this edge won’t have any effect since the edge is not written out.  The same is true for the bend and tangent lines too.  Only those on the “front” of the part will be written out. 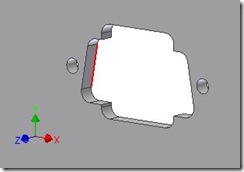 When edges have been attributed in this way the Save Copy As command honors this by displaying this as a layer in the dialog to allow you to choose whether to write it out or not.  Notice in the picture below that the last layer in the list is “CustomLayer” which is the name that was assigned using the macro above. 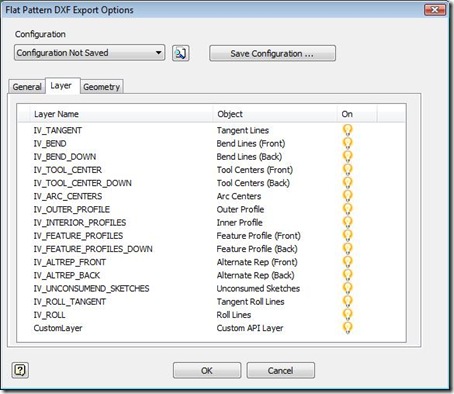 Public Sub WriteSheetMetalDXF()
' Get the active document.  This assumes it is a part document.
Dim oDoc As PartDocument
Set oDoc = ThisApplication.ActiveDocument

' Build the string that defines the format of the DXF file.
Dim sOut As String
sOut = "FLAT PATTERN DXF?AcadVersion=R12"


If attributes are something new to you watch this blog over the next couple of weeks for additional postings explaining attributes in more detail.