You can upload your Inventor assemblies or parts and it will allow your customers to configure the model based on Inventor parameters, iLogic rules or ETO designs. You don’t need to work with the Inventor API to use Configurator 360 but I thought it may be of interest to explore this new cloud capability for Inventor models.

You can get more information and sign up for a free trial here:

It is really easy to try it. Here is a screenshot where I uploaded my Inventor part. I selected the pencil icon to display a page where I could control the behavior of the parameters. 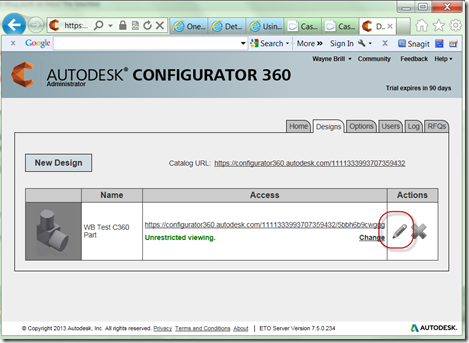 On this page select the Parameters Tab. (this is one thing that may not be easy to find). On the Parameters tab I set the Max and Min value of the Parameters. (If I set the parameter value to zero an error occurred so having a minimum avoids that condition) 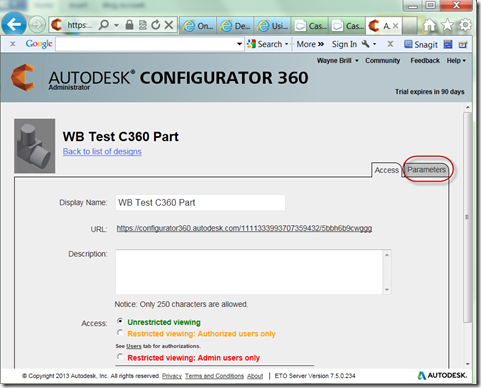 In this screenshot you see the part file that can be modified. You can try this part from here. This is just a simple ipt I used to test. The three parameters control the size of extrude features. (limit is .25 to 3.0) 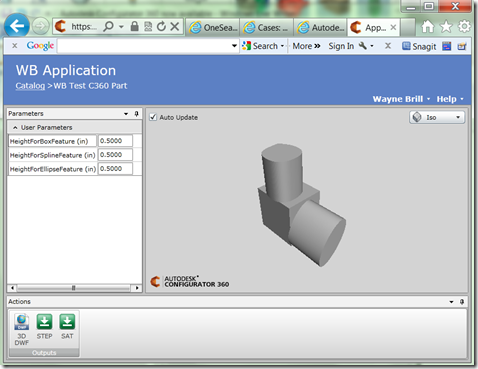 This “In the fold” blog post on has information on other Autodesk cloud products related to manufacturing that have been released recently:

1. If you get a System.IO.DirectoryNotFoundException when using  ETO Server 2013 R2. Check to see if this directory exists:

Note: If the InventorETOServices user has been deleted and recreated, there may be multiple user directories for it, such as:

In this case, add the directory in the newest one. This issue has been reported to Autodesk Engineering.

The start of the error message is:
”The message with Action 'http://www.autodesk.com/IntentServices/2012/02/IIntentServices/SetInteger' cannot be processed at the receiver, due to a ContractFilter mismatch at the EndpointDispatcher”.

Quickly narrow down the location of a crash.

After finding the design you can use a message box style technique to further narrow down the place of a crash.

To resolve this problem download this iks file and put it in this directory.  (Back up the existing xxhostSphere.iks)

Here are a couple of things about ETO 2013 R2 that I have found recently.

1. If you have used the Inventor ETO Add-In template you may find that the ribbon tab for the Add-In does not display properly when Inventor is launched through ETO Studio. When Intent is started from Visual Studio, it does extensive processing in its OnReady handler. It reads command-line arguments and they tell it to load or create a model and establish communications with VS. Because of this the event handlers in the Add-In can be called later compared to when they are called when Inventor is started normally.

To avoid this behavior you can call the code that creates the ribbon in the IntentInitialized function. Here is a slightly modified version of the Add-In code. (In IntentModel.cs) This change fixed the problem in one case. (Keep in mind that the the Add-In template should be considered as a starting point).

// This will be called if and when Intent

//gets initialized by the host.

// Added to resolve problem with AddIn

2. We have found in one case that ETO Studio is adversely effected by the Visual Studio Add-In named ReSharper. Some of the symptoms are the following:

Error Message when opening the ETO Studio project: “The parameter is incorrect”.

Edit Rule Error - “Design for selected part not loaded in Visual Studio Environment. Please make sure the project containing the design is open”

ETO Model browser sees the designs under root, but cannot open them. Clicking “Edit Design” gives the same error as above.

The behavior has been reported to Autodesk ETO engineering. For now the suggestion is to disable the Visual Studio Add-In.

The Inventor Engineer-To-Order 2013 release 2 shipped this week and I am excited to started with it. One of the main enhancements is the Visual Studio Add-In called ETO Studio. Using Visual Studio to create Inventor ETO applications will be a nice change for ETO application developers. The previous release did have a preview of ETO Studio but with this release it is ready for “prime time”. I am sure the ability to debug rules will be very welcome. The other main enhancements are quality and performance enhancements. You can download a webcast about what is new in the R2 release from this post.

Over the past several months there have been webcasts on Engineer-To-Order topics. I was able to get the recordings of these sessions and will post them. The focus of the first session is “Frame-Based Positioning” and includes a comparison to “Constraint-Based Positioning. At the end there is a question and answer session that should also be useful.

Here are the other Webcast recordings.

I thought it was interesting that theses sessions were a called a potlatch. Here is the definition from Wikipedia

“A potlatch is a gift-giving festival and primary economic system practiced by indigenous peoples of the Pacific Northwest Coast of Canada and United States. This includes Heiltsuk Nation, Haida, Nuxalk, Tlingit, Makah, Tsimshian,Nuu-chah-nulth, Kwakwaka'wakw,and Coast Salish cultures. The word comes from the Chinook Jargon, meaning "to give away" or "a gift"; originally from the Nuu-chah-nulth word p̓ačiƛ, to make a ceremonial gift in a potlatch.”

For someone getting started with ETO these sessions are a nice gift. The person leading the discussion in the first recording is Jon Balgley who works for Autodesk Engineering.

In this post you can find a discussion on using the ETO server configurator. Recently I had a case where ETO server was being used and an error “No Such Design” was occurring when  AddDynamicChildRule() was called. (One of the parameters is the name of a design). The design was available in the application and the code worked on my system. After looking at the behavior on the developer’s system we found that the design set in the ETO server configurator was not a name of an available design. In this screenshot the Design is set to FloorSystem and the problem occurred because the actual name of the design was FloorSystems. 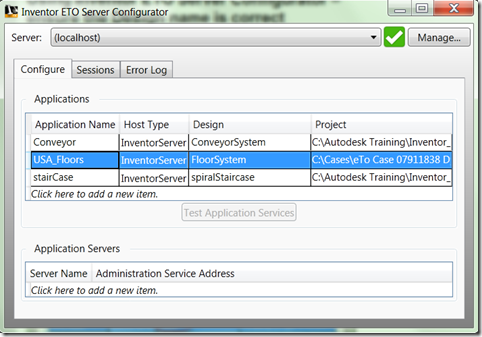 I have logged a wish list with engineering to have the configurator pop up a warning if the design set for the application is not available.

The most common way used to control the position of parts in ETO is the use of constraints. In some cases however it can be more advantageous to use frame based positioning to control the position. When using frame based positioning the trickiest thing is controlling the rotation. This example can be used to help you understand how to get the rotation you need.

The design below creates three parts: 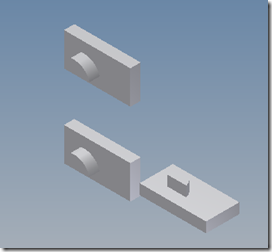 ' Create the part that will rotate
'around the Z Axis
Child myPart1_test As :Part1_Test

' Create the part that will rotate
'around the Y Axis
Child myPart1_test2 As :Part1_Test

‘Parameters to control the rotation of the third part using frames

Here is the Edit Parameters dialog and the parts in the Inventor Model. Here all of the parameters are zero. 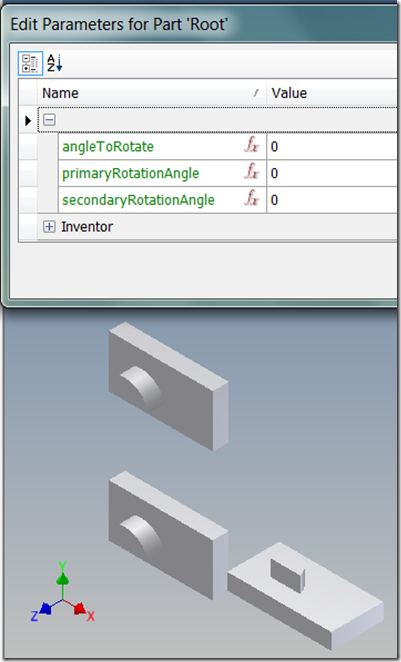 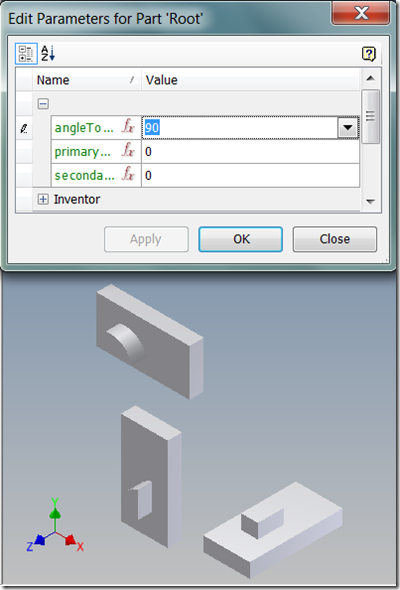 Using a design like this you can experiment with different values in the parameters and see the results the rotation angle has on the parts.

Inventor ETO Server with Sub projects – “No Such design”

Here is a solution for a problem that can occur with ETO Server with a project that has sub projects. You can get a “No such design” error just using the “Test Application Services" button in the Inventor ETO Server Configurator. When the designs are in one project with no sub projects the error does not occur.

To use the IPJ with subprojects from ETO Server, the following two things need to be done:

1. Ensure that the Main.IPJ contains the valid paths. It can be achieved with the XML editor (or notepad)

a. Find this node in the ipj file:

b. Update the paths in the <string> sub-nodes to point to existing IPJ files on the server.

2. Ensure that shortcuts to these IPJ files are created

a. You have to do that on behalf of InventorETOServices user

b. In the DOS window, enter the command:

c. You will need to enter the valid password for the InventorETOServices user 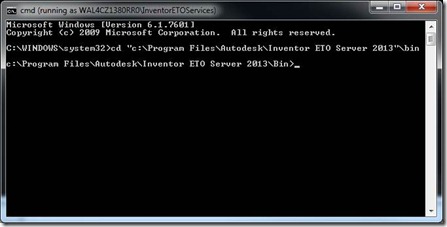 f. For each dependent IPJ, enter the command, similar to the following:

That will create a shortcut in the Inventor Server Documents folder for the InventorETOServices user.

This issue is under review by engineering and the problem should be handled in a more graceful manner in one of the future releases.

Recently I had a case where using the Vault Designs in Inventor Engineer-To-Order would cause this error and fail:

"The invoked member is not supported in a dynamic assembly"

I was unable to recreate the problem on my machine. By the process of elimination we found that it was an custom AddIn that was related to the error occurring. The solution was to simply change the setting in Visual Studio for “Embed Interop Types” to False. This screenshot shows the setting that needed to be changed in the AddIn: 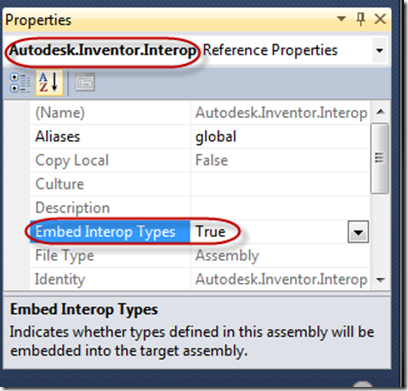 One of the tools you use when setting up an ETO application to use with ETO server is the “Inventor ETO Server Configurator”. The user interface for this utility is under review by engineering. One thing that may not be obvious is that you need to hit Enter after filling out the four fields required to add the application. 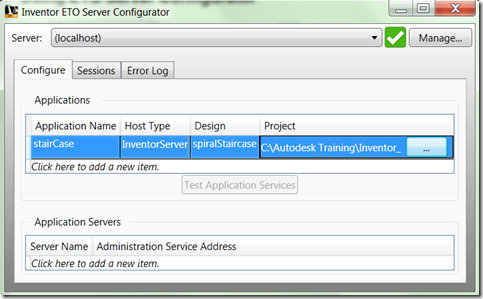 If you don’t Enter and click on “Test Application Services” you will probably get this error:

You can get more information by following the directions in the error:

To do this, see line 125 in {install location}\Inventor ETO Server 2013\Bin\IntentSessionManager.exe.config.

From the config file:

<!-- To receive exception details in faults for debugging purposes, set the value below to true. Set to false before deployment to avoid disclosing exception information –> 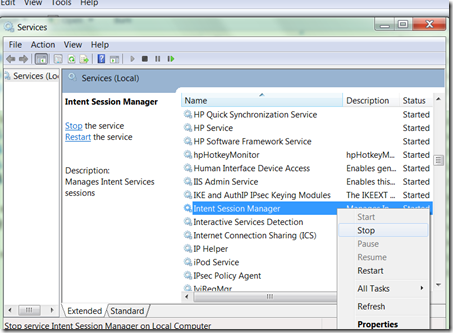 After making this change, the error when clicking “Test Application Services” will change to this error:

This was a problem I recently worked on. In the end the solution was so simple – “just hit enter”!

Here is the link to the help topic on the Inventor ETO Server Configurator: