However, in those cases you have to select the joints you want to drive and use the keyboard.
If you prefer driving all the revolute joints' rotation values through a slider, then here is a sample script you could use.
This also takes limits into consideration. 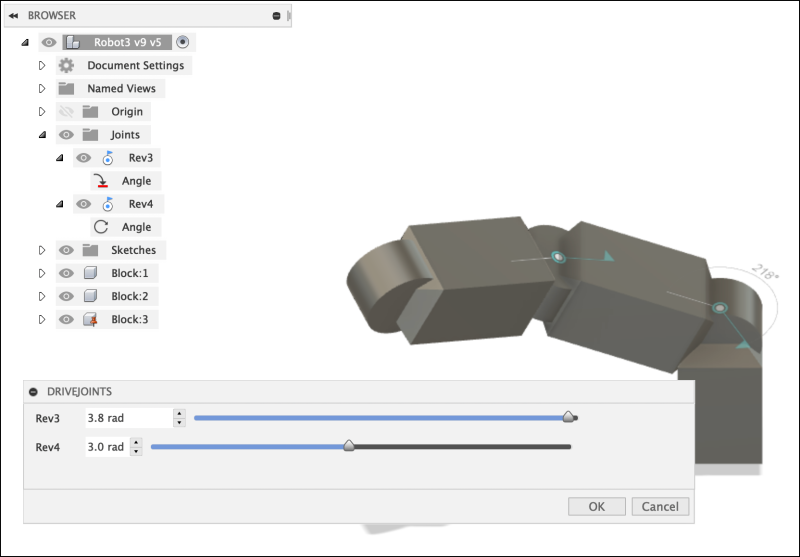 Hook up a chain using iMate's with MatchList

I already had a blog post on Hook up a chain using iMate's, but I was recently asked about more iMate related API samples, so I thought I could also demonstrate the usage of iMate MatchList.
In theory, when using a MatchList, the iMates in the various components should be matched automatically when using the "Automatically generate iMates on place" option in the "Place Component" dialog, based on the names provided in the list. I did not realize that they over-match 😬
(i.e. if there are unresolved/unpaired iMates left then they will be matched even if there is no appropriate name in the MatchList)
Inventor Idea Station: Match list for imates

This is what I thought of doing as a test:

Unfortunately, as I mentioned above, simply relying on the "Automatically generate iMates on place" option in the "Place Component" dialog will not work as it will also match Insert1a to Insert3b and Mate1a to Mate3b when adding the second part to the assembly.

Instead, we can just place all the components in the assembly at the same time without automatic iMate resolution and then use the API to match the iMates.

Here is the VBA code I used - if you want to use .NET / iLogic instead have a look at Convert VBA to .NET / iLogic

When the code finishes, the parts will be on top of each other - I described the same thing in the other article.
Best thing is to ground one of the components and then you can move around the others so they come apart and end up like shown in the picture on the top.

The above code only works well if inside the assembly each iMate has a unique name and should only be matched with a specific other iMate.

Here is the Inventor 2020 model I used: Download Chain_with_MatchList