Our team, Autodesk Developer Network / Forge Partner Development, created a few add-in's for the Autodesk App Store, including the Fusion 360 one as well (they all have the support email: fusion.apps@autodesk.com)

The main purpose of those add-in's were to show how powerful API's can be, how it can help you automate boring tasks, e.g. moving parameter values from Fusion 360 to another application and back. When you select these add-in's in the Scripts and Add-Ins dialog of Fusion 360, then you can click "Edit" and see the source code. You are free to use that source code, modify it, and even use it to create a commercial app out of it :)
If you think that some of the functionality shown by those add-in's should be part of Fusion 360, then you can ask for that on the Fusion 360 IdeaStation :)

After that small intro, here are the two errors that people contacted me about so far concerning the Parameter I/O add-in. I have not heard of other ones yet:

1) Cannot import CSV file after editing it in Excel

Maybe other apps could have this issue too, but I've only heard of Excel in this context. Parameter I/O expects the CSV file's content in a given format. In each line of the file there should be values formatted like this: <parameter name>,<unit>,<value>,<comment>
Please note that each value is separated by a comma, just like the meaning of CSV suggests: CSV = Comma Separated Values. Any of the values could also be wrapped in quotation marks as well: "MyParam",in,"12.00","Some comment"

Depending on your computer's Regional or Locale settings, Excel might use another character (e.g. semi-colon ';') to separate the values. Parameter I/O does not like that :(
So please open up the problem CSV file in a Text editor and make sure that the formatting is correct before trying to import the values from it. You can also find articles on the net about changing the character Excel is using for value separation.

2) Cannot move parameters from one model to another

In other words, the workflow in question is: export parameters of one model, then import it in another model.
You might run into issues when in your model one parameter is referencing another one, e.g. MyParam1 = MyParam2 * 3
When you export the parameter values from your model, they might be saved in the CSV file in a way that a parameter is being referenced before it's declared:

Unfortunately, if you leave the CSV file like that and try to import it into a new model which does not have those parameters yet, then the program will throw an error during the import. That's because when creating MyParam1, the program is trying to set its value to something that does not make sense at that given moment: MyParam2*3
The problem with that is that MyParam2 does not exist in the new model just yet.

You would have to reorganize the content of the CSV file in a way that MyParam2 is declared before MyParam1.

This past June for the Forge Developer Conference I worked with some of the great folks at opendesk and ShopBot to put together a working demonstration using their furniture designs, machine tools, and Fusion 360. 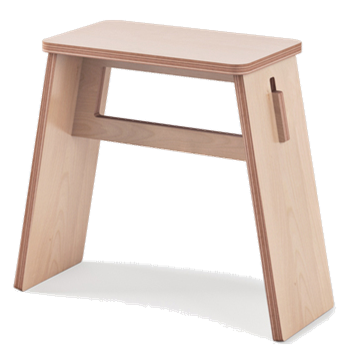 opendesk has a large catalog of furniture designs that are made locally on-demand from sheet stock. You should check out their website because it’s an interesting concept.  ShopBot has a selection of CNC routers in all sizes from large 12 by 5 foot monsters down to the portable Handibot.  We decided to use the Johann Stool design from opendesk and allow attendees at the conference to design custom engravings for the top of the stool that would be cut at the conference using a ShopBot tool.

I got involved to try and create a simple interface to allow non Fusion 360 users to easily create a design and send it to the router.  This consisted of two parts.  First I created a series of Fusion 360 custom commands that draw various designs as a sketch.  The picture below shows the new panel that the add-in creates in Fusion and its commands.  There are several different patterns that the commands allow you to create.  The one shown below creates a rectangular mesh with the grid positions randomized.  There’s also a command that creates several polygons to create a flower pattern, one that creates circles in a random pattern, one that rectangles arranges randomly, and finally one that draws sin curves. 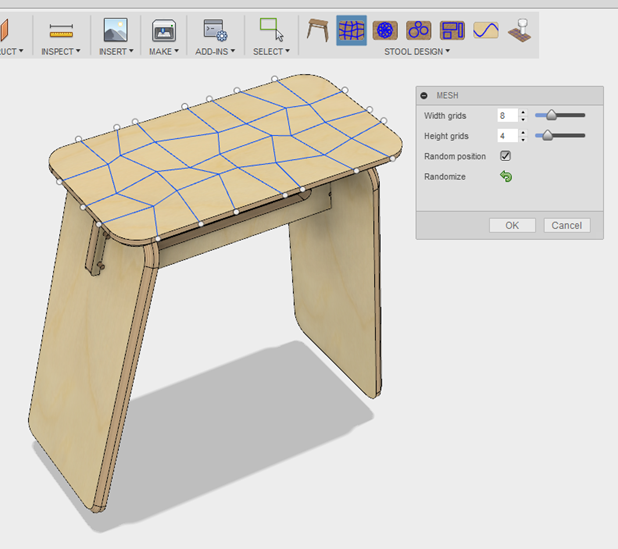 The main thing to remember with all of these specialized commands is that they’re just automating the creation of sketch geometry.  Below is the result of using the custom sketch commands and a bit of manual editing on the resulting sketches to create a new design. 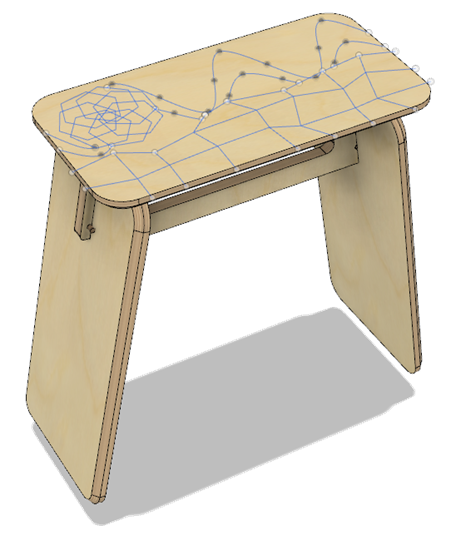 The last custom command provided by the add-in sends the design to the CNC router.  To make the entire process easier, it doesn’t use the NC capabilities of Fusion 360 but with a single button click it directly creates the g-code data from the sketch geometry and sends it to the CNC router.  The command gets the geometry information from the sketch and essentially treats the sketch geometry as the tool path to create a g-code file that will drive the cutter along the sketch geometry.  Splines and circles are stroked into small lines and text is also converted into lines so the g-code consists entirely of point-to-point directions. Below is an example of one of the stool seats that contains some text.  To reduce the time at the conference to create a stool the stools were already mostly cut out in panels of birch plywood and then only the custom pattern on top needed to be machined. 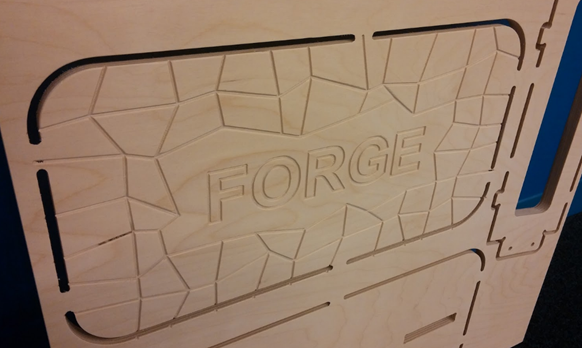 Here’s Bill from ShopBot at the booth cutting a stool top. Bill also reported on the experience in his blog. 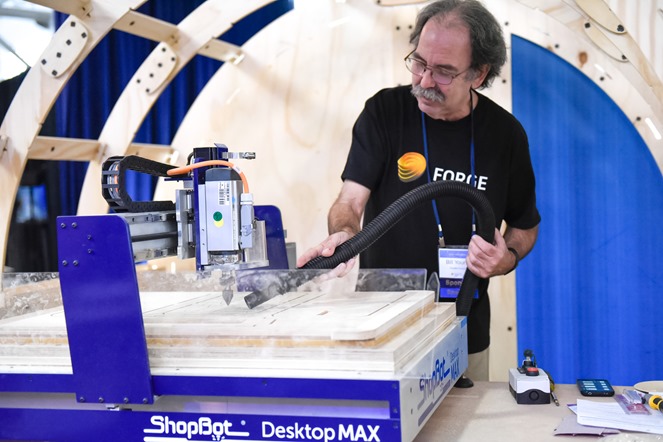 Besides doing the stools, ShopBot also brought a couple of the portable Handibot CNC routers and we used the same process to machine small badges that people could design in the same way. If you haven’t seen the Handibot before you should check out the website and look at some videos on YouTube to see what people are doing with it. 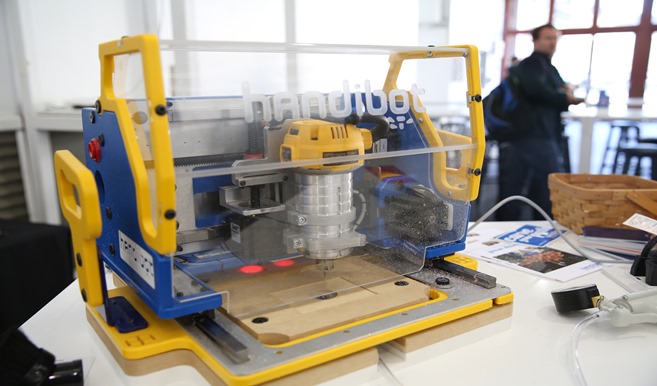 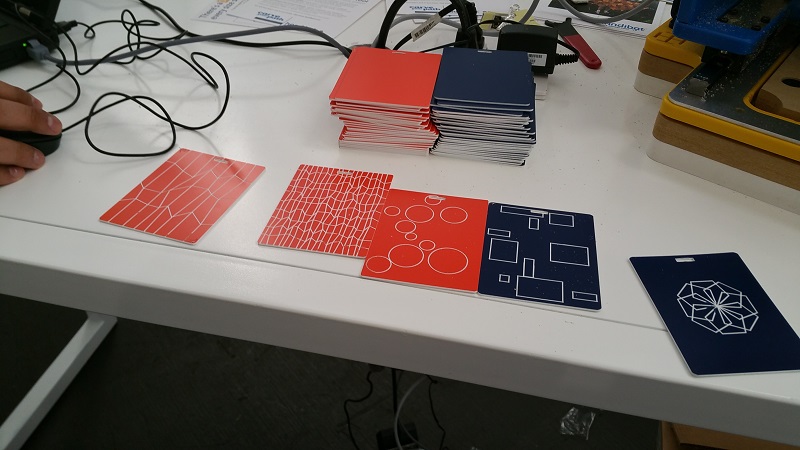 The whole process of getting ready for the Forge conference was a lot of fun and very educational for me.  CNC isn’t new to me but I hadn’t every directly written g-code before.  The entire Fusion stool add-in is currently available on github.  This could easily be done with Inventor too but so far I’ve only needed it for some Fusion 360 events.

After the Forge conference, a couple of guys from Autodesk (Philippe and Lucas) wanted to do something interesting with a Handibot at another event.  They liked what we had done at the Forge conference and had the great idea of cutting chocolate. Philippe is a much more colorful writer than me and has written a report about their adventure with chocolate. 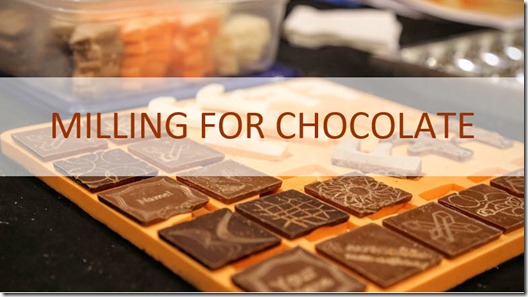 Kirk Arthur reminded me at Autodesk University about an issue with add-ins that I had blogged about and asked if I had made the recommended change to the Sheet Metal Extents add-in.  I truthfully couldn’t remember so I’ve gone ahead and bumped the version number, recompiled it, built the installer, and made the new version available.  As usual, please let me know if you run into any problems with it.  This is version 3.8 and should be compatible with Inventor 2013 and later.  Use this link to download a zip file that contains an installer that will install the add-in.

If you’re unfamiliar with this add-in, here’s the text from the ReadMe with a brief description.

This is an Add-In that when installed will automatically create and update three custom iProperties.  It should work for Inventor 2013 and later.  The iProperties created are:

No log-in page on Mac when joining public WiFi

This has nothing to do with Autodesk software but thought I would write it down at least for my own benefit as I have not seen this solution mentioned anywhere else.

When joining the hotel WiFi with my Mac I'm not redirected to any webpage, so I cannot log in, which means I don't have internet access. :(

When I was looking around in the System Preferences >> Network settings to try one of the workarounds of removing DNS servers or adding the google ones, I saw that a DNS server has automatically been added. 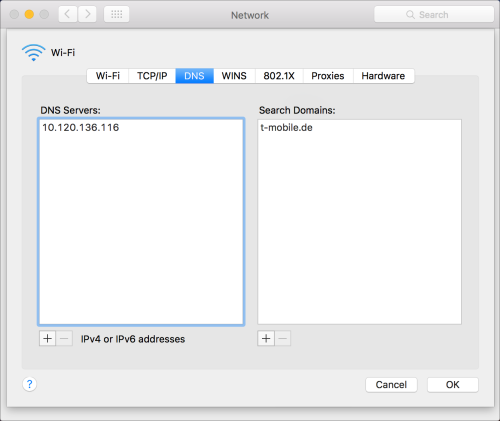 I went to that IP address in my browser, and voilà!, the log-in page came up :)

Maybe this only works with this specific WiFi, but could be a generic solution. In case of many other WiFi's the log-in page IP was simply 192.168.1.1