A new Fusion 360 update went out today and it has several new features in the API. 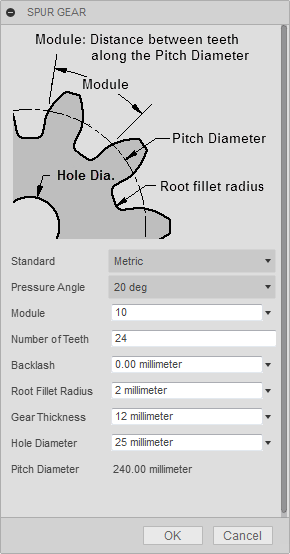 I was working on answering a question recently and put together a bit of code to make sure my answer was correct and thought it might be useful to some others so I want to share it here.

The initial question was a good one. The question was how to create an offset work plane in an assembly using the API. The obvious thing is to use the AddByPlaneAndOffset method of the WorkPlanes collection but if you try it, it will fail and if you look at the help it will tell you that it’s not supported in assemblies, but it also doesn’t say how to do it.

Assemblies and construction geometry are a bit strange. Working interactively with Inventor, work geometry seems to work just that same as when working in a part, but if you look close you’ll see a big difference. If you create an offset work plane using the UI in an assembly and then look at the result in the browser you’ll see the work plane in the browser just like you would in a part, except in an assembly the work plane browser node can be expanded and then you’ll see that there’s a flush constraint.  Work geometry in a part has intelligence within itself to know what it’s related to and how it’s related so if that geometry is modified it can correctly re-compute itself.  Work geometry in an assembly isn’t intelligent at all.  It just exists in space and the intelligence to position it is done by adding constraints.

Below is the VBA code I wrote to test this. It demonstrates getting a selected face and then creating a work plane on that face. I’m using an offset of 0, but any offset could be used.  A fair amount of the code is just figuring out the orientation of the work plane.  Although the orientation doesn’t really matter except for looks.  To get a logical orientation it uses the longest linear edge on the selected face and if there aren’t any linear edges then it aligns it with one of the primary model axes. The UI command also does some additional work to size the created work plane to fit the geometry, which the API and this sample doesn’t do.  The API does support setting the size of a work plane but I haven’t attempted that here.

' Get the underlying plane geometry from the face.
Dim facePlane As Plane
Set facePlane = selFace.Geometry

Dim xVec As UnitVector
Dim yVec As UnitVector
Dim pi As Double
pi = Atn(1) * 4
If Not longDir Is Nothing Then
' Use the longest edge as the x direction for the work plane.
Set xVec = longDir
Set yVec = facePlane.Normal.CrossProduct(xVec)
Else
' No linear edges was found so calculate another axis to use as the x axis.
' Use the model x, y, or z axis depending on which one is closest to 90 deg from the normal.
Dim angleDiff As Double
Dim testVec As UnitVector
Set testVec = tg.CreateUnitVector(1, 0, 0)
angleDiff = Abs((pi / 2) - facePlane.Normal.AngleTo(testVec))
Set xVec = testVec