The Inventor API supports some functionality that’s relatively new (since Inventor 2009) and is not very well known.  It’s called Transient B-Rep and is accessed through the TransientBRep property on the Application object.  It supports some relatively simple functionality and also some of the more complicated capabilities provided by the API.  Luckily you don’t have to understand the complicated in order to use the simple.

There was a question on the Inventor Customization Forum recently that asked about being able to quickly perform many Boolean operations on a body by repeatedly moving another body and doing a difference operation.  They didn’t need the resulting model to have any intelligence (i.e. be parametric) but just needed accurate geometry.  The TransientBRep object supports functionality that makes this possible.

The Inventor API uses the term Transient to mean data that is not seen or saved in the document.  It’s data that exists outside of the model.  The TransientBRep object provides functions that are a very light wrapper over the Autodesk Shape Manager (ASM) modeling core.  When you create a feature in Inventor, it’s also using ASM to do the actual model computations but it is also doing a lot more work to remember all of the feature input, adding additional information to the resulting model to allow for associativity, creating data in the browser to represent the feature, and updating the graphics to display the modified model.  Although a key part of the process, the actual modeling is just a piece of all of the work that’s done.  Using the TransientBRep functionality allows you to do just the modeling work without all of the overhead of creating a standard feature.

I’ve created a small sample to demonstrate the concept and illustrate how to use the API.  I have a part model that contains two bodies.  The yellow body will be used as the base or main part material.  The red part is used as the tool.  In this case it can be thought of as a punch that will be used to remove material from the base part.  The punch has been built relative to the model origin, as can be seen by the base work planes. 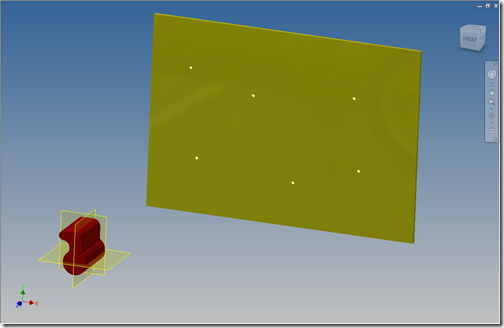 In addition to the two bodies you can also see several work points that have been created. They’re normal work points except they’ve been named “Punch#”. as shown below. The points are used to specify locations where the tool is to be subtracted from the base. 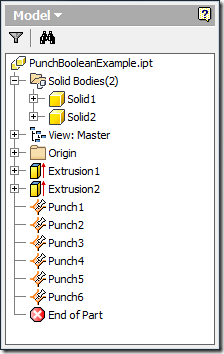 When the macro is run it prompts you to select the base and tool bodies and then uses the TransientBrep functionality to create transient copies of those and then performs multiple Boolean operations by moving the tool and subtracting it from the base.  Finally it creates a base feature using the modified base body and turns off the display of the tool and the base body so the result can be seen, which is shown below. 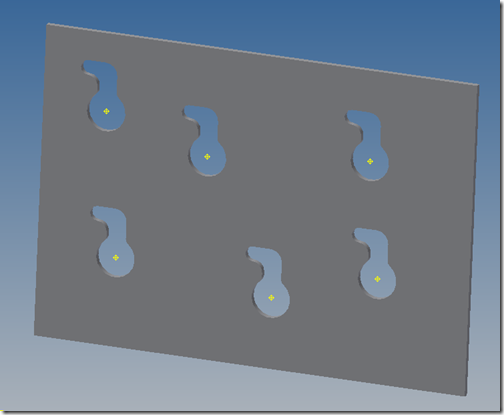 Below is the sample macro and here is the sample part that I used to test it.  The part is an Inventor 2015 model, but this macro will work in previous versions of Inventor too.

' Create a matrix and a point to use in positioning
' the punch.  The matrix is initialized to an identity
' matrix the point is (0,0,0).
Dim trans As Matrix
Set trans = tg.CreateMatrix
Dim lastPosition As Point
Set lastPosition = tg.CreatePoint

' Process each work point whose name starts with "Punch"
' by performing a boolean with the tool at that location.
Dim wp As WorkPoint
For Each wp In partDef.WorkPoints
If Left$(UCase(wp.Name), 5) = "PUNCH" Then
' Transform the tool body to the position of the x and
' y coordinates work point, leaving the z as-is.  The
' punch is at the last punch so the transform defines
' the difference between the last and the current.
trans.Cell(1, 4) = wp.Point.X - lastPosition.X
trans.Cell(2, 4) = wp.Point.Y - lastPosition.Y
Call tb.Transform(transTool, trans)

' Save the last position.
Set lastPosition = wp.Point
End If
Next

' Force a refresh of the view.
ThisApplication.ActiveView.Update
End Sub

This has nothing to do with the API but is just something fun that I’ve been able to do with Inventor.

Hood to Coast is a large running relay race here in Portland each August that covers almost 200 miles and has over 1000 twelve-member teams.  You can get a small idea what the race is like from the trailer of a documentary that came out a few years ago.

I’ve been on a few teams over the last several years but for the last two years I’ve designed the team T-shirts using Inventor.  The first one was for an Autodesk sponsored team named “Sole of the Machine”.  Actually it started out as “Soul of the Machine” but after the foot design we changed the name to match.  I took advantage of the new T-Spline functionality before it was officially released to design the foot model.  I also used the ray tracing in Inventor to render the final image. 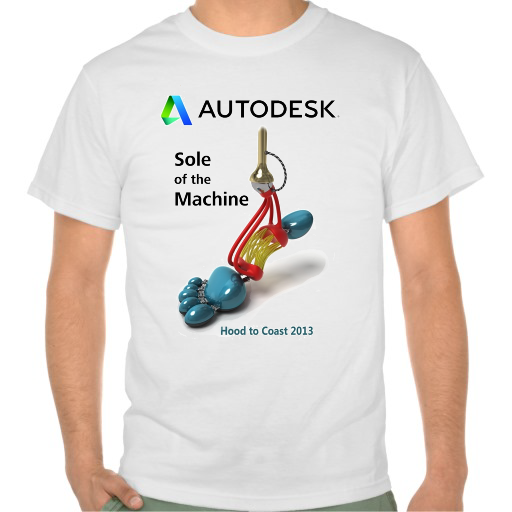 Here is the final rendering of the model.  You can click on the image to see a higher resolution picture. 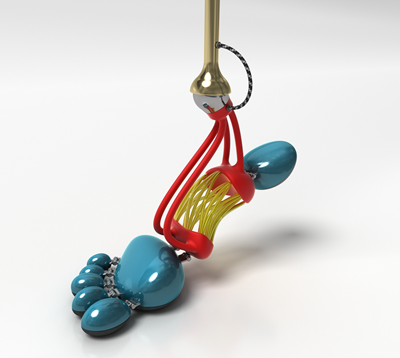 This past August I was back with my usual team and the team name was the “Supersonic Slugs”.  Here’s the T-Shirt design I modeled this year.  Again, using T-Splines and the ray tracing in Inventor. 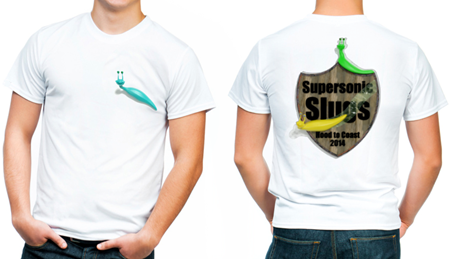 Here are larger views of the front and back images and clicking them will open a higher resolution image. 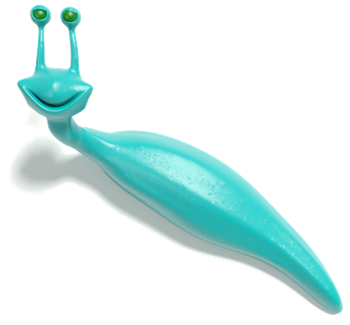 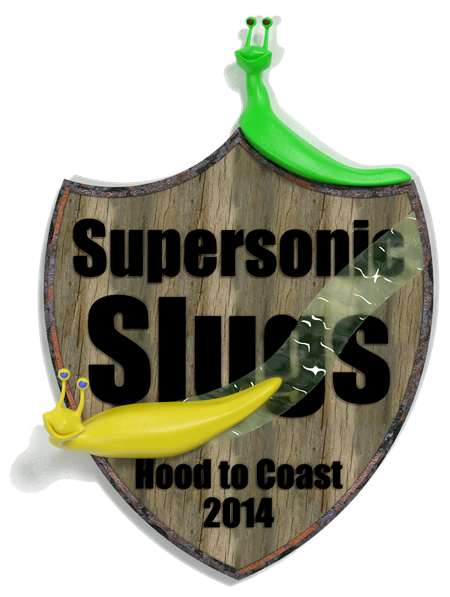 Since I made the initial post about the Fusion 360 API a discussion forum has been created.  If you have questions or comments about the API, that would be the best place to post them.

I’m Back and Have Some Fusion 360 News

It’s been a long time since my last post and I’m hoping this post is the beginning of ending the dry spell, but I’m not making any promises

.  It’s been a very busy past year.  Professionally, It began by transferring from the Inventor development team into the ADN group that supports developers using the the API’s of all of the various Autodesk products. As part of that transfer I was hoping to be able to spend more time with you and others that are using the API’s to make the Autodesk products better.  Soon after this transition I was loaned back to the development group but this time I’m working with the Fusion development team to help with the design of the Fusion API.

Earlier this week a new version of Fusion 360 was released and it contains a preview of the API (Application Programming Interface) we’ve been working on. It’s rare that any off-the-shelf product will do everything you need it to do in the way you would like it to. This applies to Fusion too but now by writing scripts that use the new API, you can drive Fusion to automate repetitive tasks and create new capabilities. 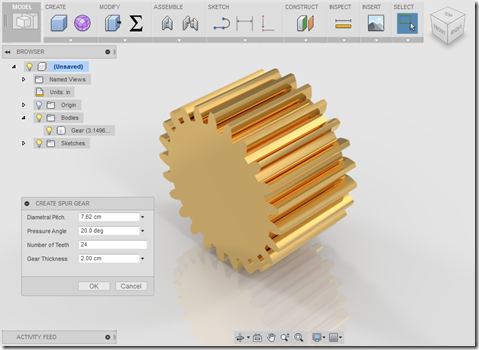 This release of the API is a preview so there’s still a lot that we need to do but there is also quite a bit of functionality as you can see demonstrated in the picture above. If you have Fusion installed you have access to the functionality and can try running some of the samples and look at the documentation.  The API documentation is available on the web along with all of the Fusion product help, as shown below. 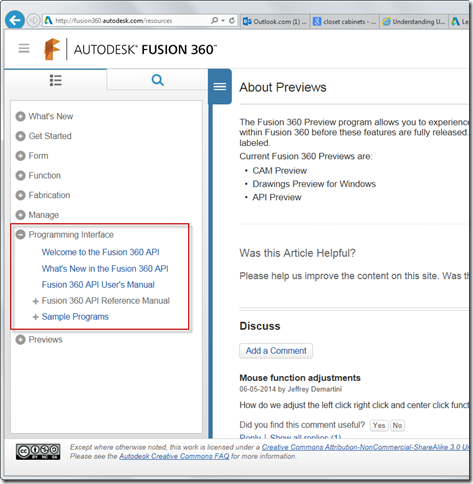 The Fusion 360 API User’s Manual contains some overview documents to help get you started and there are some sample programs that are part of help and also some that are delivered with Fusion.  The available programs, or scripts, are accessible through the Scripts Manager, as shown below. 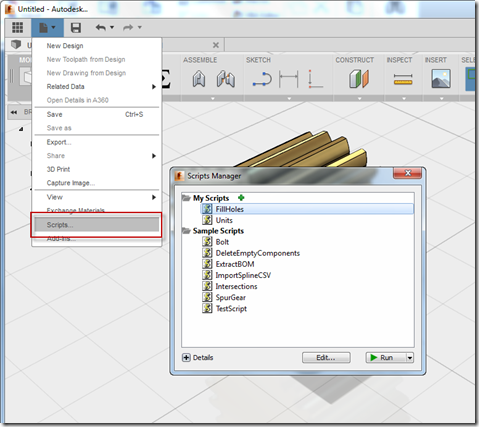 We would very much like to hear your comments about the API, both about what’s in this preview release and what functionality you would like to see exposed next in upcoming releases.