' Ask to see if it should operate on the selected points
' or all points.
Dim getAllPoints As Boolean
getAllPoints = True
If pointCount > 0 Then
Dim result As VbMsgBoxResult
result = MsgBox("Some work points are selected.  " & _
"Do you want to export only the " & _
"selected work points?  (Answering " & _
"""No"" will export all work points)", _
vbQuestion + vbYesNoCancel)
If result = vbCancel Then
Exit Sub
End If

If result = vbYes Then
getAllPoints = False
End If
Else
If MsgBox("No work points are selected.  All work points" & _
" will be exported.  Do you want to continue?", _
vbQuestion + vbYesNo) = vbNo Then
Exit Sub
End If
End If

If filename <> "" Then
' Write the work point coordinates out to a csv file.
On Error Resume Next
Open filename For Output As #1
If Err.Number <> 0 Then
MsgBox "Unable to open the specified file. " & _
"It may be open by another process."
Exit Sub
End If

' Get a reference to the object to do unit conversions.
Dim uom As UnitsOfMeasure
Set uom = partDoc.UnitsOfMeasure

Moving a Part in a Flexible Assembly

I recently received a question that I thought there might be some general interest in the answer.  Here’s the problem.  I have the assembly shown below.  It’s free to move in the ways you would expect; it can pivot about the base and the arm can extend.  Everything is fine so far. 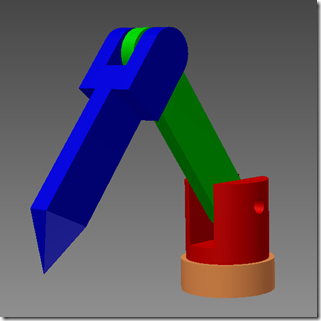 Next I insert the arm assembly shown above into a new assembly.  Then I insert the yellow block part into the assembly and constrain it to the tip of the arm, as shown below. 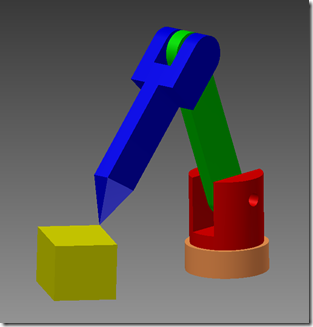 First, the arm assembly is rigid if I try to move any of its parts.  That’s the behavior I would expect because, by default, subassemblies are rigid within an assembly.  However, you can set the subassembly occurrence to be “flexible” so that it will behave the same as it does when the subassembly is active.  That is, the arms can be dragged and the positions of all of the connected parts will update.  I can also drag the yellow block and that will cause the arms to reposition to follow the block.

Here’s the code I used to test this.

Public Sub MovePart()
' Have the occurrence that will be moved selected.
Dim occ As ComponentOccurrence
Set occ = ThisApplication.CommandManager.Pick( _
kAssemblyOccurrenceFilter, _
"Select an occurrence.")

' Get the current grounded state of the selected occurrence.
Dim groundState As Boolean
groundState = occ.Grounded

' Reset the grounded state of the occurrence back to
' its original state.
occ.Grounded = groundState
End Sub

The Inventor API survey has been extended.  You now have until June 17th to provide your input.  This helps us a lot in determining what we’re going to do in upcoming releases so please give us your opinion on what’s important.

I’ve just corrected a problem to the code from my previous post for the macro that steps through the features in a part.  It just shows you that I didn’t test if very thoroughly.  The previous version only works on sheet metal parts.  The new version works on regular parts too.  If you already got the code, you just need to download the zip file, unpack it, delete the form from your VBA project, and re-import the form file.

Stepping Through the Features of a Model

A recent question came in about a way to make it easy to step through the features in the browser.  Of course you can do this manually by dragging the stop node feature-by-feature in the tree, but that quickly becomes tedious.  Here’s my answer to problem.  It’s a small VBA program that displays a form as shown below.

Pressing the buttons let’s you move the stop node to the top, to the bottom, or advanced it one step at a time, either up or down the tree.  A utility like this can be useful when you’ve received a model from someone else and want to understand how it was built.

I think the trickiest part about using this program will be adding it to your VBA project.  Fortunately you only have to do that once.  Below is the step-by-step process to add it to your default VBA project and create a button in the ribbon to execute it.