I had a couple of requests lately asking about the possibility of using the API to change the colors of the curves in a drawing view to match the color of the parts in the assembly.  Below is a program that does this.  It starts with a selected drawing view and gets the associated assembly.  It then iterates over every occurrence in the assembly and for each part occurrence gets the color of that part as it exists in the assembly.  If the color has been overridden in the assembly then it will use the override color.  It then checks to see if there is a layer in the drawing that has the same name as the color.  If there isn’t it creates a new layer with the same color.  It then gets all of the curves in the drawing that are associated with that occurrence and assigns the layer to those curves.  The picture below shows the result after running it on the engine sample that’s delivered with Inventor. 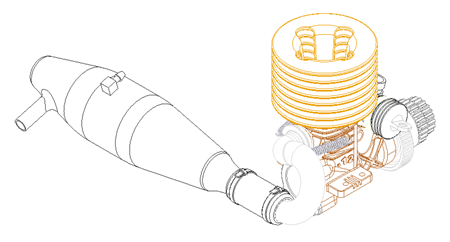 Here’s the VBA code that does the work.  A key API functions that the program uses is the DrawingView.DrawingCurves property, which given an occurrence returns all of the curves in the view that are associated with that occurrence.  It also uses the Sheet.ChangeLayer method which is a new method in Inventor 2011 that changes the layer of a group of objects.  The program could be written without this, but would be much slower since it will need to change the layer of each curve one at a time.

' Process the occurrences, wrapping it in a transaction so the
' entire process can be undone with a single undo operation.
Dim trans As Transaction
Set trans = ThisApplication.TransactionManager.StartTransaction( _
drawDoc, "Change drawing view color")

' Call the recursive function that does all the work.
Call ProcessAssemblyColor(drawView, asmDef.Occurrences)
trans.End
End Sub

' Get the render style of the occurrence.
Dim color As RenderStyle
Dim sourceType As StyleSourceTypeEnum
Set color = occ.GetRenderStyle(sourceType)

' Verify that a layer exists for this color.
Dim layers As LayersEnumerator
Set layers = drawView.Parent.Parent.StylesManager.layers

If Err.Number <> 0 Then
On Error GoTo 0
' Get the diffuse color for the render style.
Dim red As Byte
Dim green As Byte
Dim blue As Byte

' Copy an arbitrary layer giving it the name
' of the render style.
Set colorLayer = layers.Item(1).Copy(color.Name)

' Set the attributes of the layer to use the color,
' have a solid line type, and a specific width.
colorLayer.color = newColor
colorLayer.LineType = kContinuousLineType
colorLayer.LineWeight = 0.02
End If
On Error GoTo 0

' Get all of the curves associated with this occurrence.
On Error Resume Next
Dim drawcurves As DrawingCurvesEnumerator
Set drawcurves = drawView.DrawingCurves(occ)
If Err.Number = 0 Then
On Error GoTo 0

' Change the layer of all of the segments.
Call drawView.Parent.ChangeLayer(objColl, colorLayer)
End If
On Error GoTo 0
Else
' It's an assembly so process its contents.
Call ProcessAssemblyColor(drawView, occ.SubOccurrences)
End If
Next
End Sub

This sample program sets the color of each occurrence based on its color in the assembly. You could choose to set the color based on any other criteria instead. It can be anything associated with the part. you just have to choose what attribute of the part to use and what the associated set of colors are that cam be assigned to each part. For example, you might have a custom iProperty that controls what color is assigned to each part in the drawing.

For those of you on subscription, the Inventor 2011 Subscription Bonus Pack includes API functionality for AEC Exchange.  (In Inventor it is still referred to as AEC Exchange but the API refers to it as BIM Exchange since it will be called BIM Exchange in the future.)  The API provides the same functionality that you have through the user-interface; you can define and edit connections, define and edit the definition of a component, and output a component as an .adsk file.

Be sure to read the introduction, particularly if you are using a .Net based language.  There is also a small sample program at the bottom of the document.