There was a recent question in the newsgroup about exporting the structure of an assembly to an Excel spreadsheet.  I’ve written a small VBA program that does this.  When executed it will prompt for a filename and then write the structure of the currently open assembly to the file.  The file created is a CSV file, which can be opened directly by Excel.  For each occurrence in the assembly it writes one row, with the first column containing the name of the occurrence as seen in the browser, and the second column containing the full filename of the part or assembly represented by that occurrence.  The data is written such that the structure of the assembly is preserved, which can be seen below. 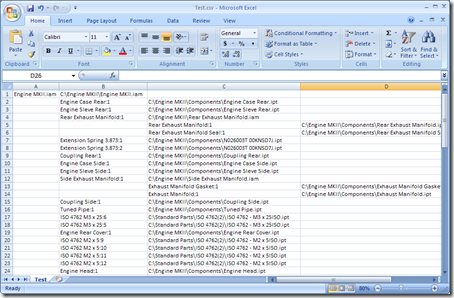 It’s likely everyone using this will want different information or a different format for the output.  This is a good time to get your feet wet and learn a little bit about programming Inventor so you can make the small changes to have it write out the information you want.

For those of you unfamiliar with VBA here are the steps to using this program: 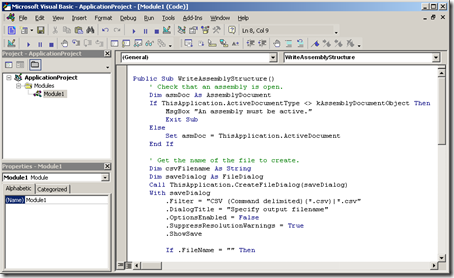 Once pasted, you can run the program.  This posting describes a few ways to do that.

Here’s the code to copy and paste:

If .FileName = "" Then
Exit Sub
Else
csvFilename = .FileName
End If
End With

' Read through the assembly and write the structure out.
Call WriteStructure(asmDoc.ComponentDefinition.occurrences, _
1, FilePointer)

' Iterate through the occurrences in the current level.
Dim occ As ComponentOccurrence
For Each occ In occurrences
' Write information for this occurrence to the file.
Print #FilePointer, String$(Level, ",") & _
occ.Name & "," & occ.Definition.Document.FullFileName

' If this occurrence is a subassembly iterate
' over its occurrences.
If occ.DefinitionDocumentType = kAssemblyDocumentObject Then
Call WriteStructure(occ.SubOccurrences, Level + 1, _
FilePointer)
End If
Next
End Sub

Upgrading your Add-Ins to Support the Ribbon User Interface

I thought I should share some more of the work that was done for the last Autodesk University.  This class covered how to upgrade your add-in to use the ribbon user interface.  It was one of the new virtual classes and the video is available.  However, the paper contains all of the information in the video plus some additional material that I didn’t have time for in the video.

The paper answers the following questions:

Below are links to the paper and some sample programs.

How to Write an Inventor Add-In

I’ve posted similar material previously but this is more complete and up to date.  The attached paper and code is from a presentation at this past Autodesk University.  I believe the paper can be used by itself and is not dependent on you having been at the presentation.  The primary focus is on someone that’s now using VBA and would like to move to add-ins, although it will also serve as a good general introduction for anyone that wants to learn more about add-ins.

The paper tries to answer the following questions:

The languages used are VB Express 2008 and Visual Basic from Visual Studio 2008.  It also covers the differences you’ll run into between VBA and VB.Net.