I gave a high-level presentation about automating drawings in Inventor at AU 2007.  The most useful information from that presentation is the sample programs, but apparently they aren’t available from the AU website since I’ve had a couple of requests for them recently.  Remember this is from a couple of years ago and Inventor now supports some things that it didn’t then.  Here’s a download that contains the original class handout plus all of the sample programs.

I recently made a post discussing the issues around Add-Ins written using Visual Basic 6 and 64-bit Windows.  I made the mistake of not testing it completely before making that post.  Everything in the original posting is correct but it’s incomplete because I hadn’t thought through the registration process.  I’ve update the original post to add more information to cover registering your Add-In on the 64-bit machine.

I saw a question in the customization newsgroup where someone has an Add-In written using Visual Basic 6 and wants to use that add-in with the 64-bit version of Inventor.  In doing this there are some issues to be aware of:

In this case, Inventor is a 64-bit exe and the Add-In is a dll.  A VB 6 Add-In will be a 32-bit dll.  Based on the statements above, this means that it can’t be used by 64-bit Inventor since that results in a 64-bit exe trying to load a 32-bit dll.  There are two possible solutions; change the add-in to be an exe instead of a dll or convert the add-in to .Net where you have the ability to create a 64-bit dll. 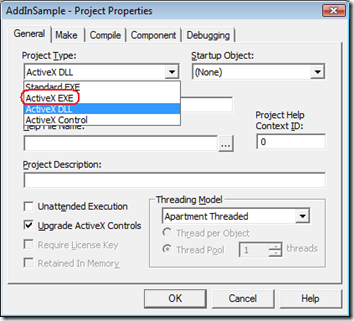 There are two things to be aware of when converting a dll Add-In to an exe Add-In.  The first is that the performance of the exe Add-In won’t be as good as the dll Add-In.  A dll Add-In is loaded into Inventor’s process space and API calls are made directly.  An exe Add-In runs in its own process space and is separate from Inventor.  This requires API calls to be marshaled between the two processes which is not as efficient.  How much slower it is will differ from Add-In to Add-In because it depends on what kind of API calls you’re making.

The second issue is more of a problem and is a side-effect of the fact that data has to be marshaled between the two processes.  Inventor’s API relies on Microsoft technology to do the marshaling between the two processes.  Unfortunately, this technology doesn’t support the marshaling of bitmap data.  This means that any Inventor API calls you make where an IPictureDisp object is passed as an argument won’t work with an exe Add-In.

Their are only a few calls in Inventor’s API that work with bitmaps but one of these is a function that most Add-Ins use.  That’s the AddButtonDefinition method that’s used to create a button for the user-interface.  An exe Add-In won’t be able to have icons on its buttons because of this limitation.  Icons are optional so you can remove those arguments from the AddButtonDefinition call and then the Add-In should function correctly but you’ll only have text on the button instead of an icon.

Another area of the API where a bitmap is used is when getting or setting the thumbnail image for a document.  This will fail for an exe Add-In.

Using the VB6 version of the SimpleAddIn sample that’s delivered as part of Inventor’s SDK, here are the changes that are required to make it work on 64-bit Windows.

Converting a Visual Basic 6 Add-In to 64-Bit
Visual Basic 6 is only capable of creating 32-bit applications.  To convert an existing project to a 64-bit application will require porting the application to VB.Net, which does support the creation of a 64-bit application.  VB.Net has a VB 6 conversion tool but I would suggest that you NOT use it.  Instead, I would use the Add-In Wizard that’s delivered as part of Inventor’s SDK to create a new Add-In and copy the code manually from VB 6 into the VB.Net project.  There are too many differences between VB 6 and VB.Net and my experience is that cleaning up the resulting code from the conversion is harder than copying over smaller portions of code at a time an manually converting it.

You’ll also need to recreate your dialogs.  The dialogs are much more powerful in VB.Net so this lets you take advantage of those new features.  The basics of converting your code is covered in this post: Converting VBA Auto Macros to an Add-In.